I felt like doing a bit of hand painting this week and decided to give the Flames of War Tiger tank I built a go.

I thought it would be nice to go for a simple camouflage pattern and decided on green and brown stripes over the yellow base coat. The green looked pretty horrific END_OF_DOCUMENT_TOKEN_TO_BE_REPLACED

For those who don’t know, flames of war is like a real war (mainly ww2) table top game like Warhammer.

Even if I never play the actual game I thought it would be nice to make the models in it.

I have recently built the Stug G tanks from the set as well as a Wittmans Tiger Tank I found on eBay. The Tiger kit was new and good fun to build. It has a resin hull with any additional parts to add being metal.

Here I have started the process of painting the models by giving them a coat of grey primer. 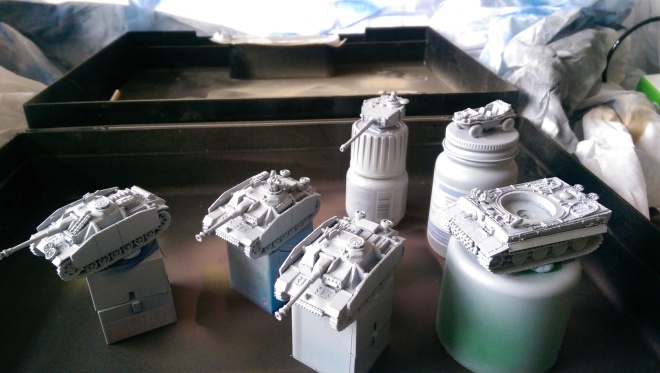 I then airbrushed the base coat for the models using lifecolor RAL 7028 DunkelGelb.

Yes DunkelGelb is that infamous colour of German armour that people will argue about till the end of time. Being basically dark yellow in German I guess its open to a lot of interpretation. I have used a variety of different shades of dark yellow on German Armour and find lifecolor’s one to be the best.