My stock 17.5 Thunder tiger smoked out last week so I have replaced it with an orion 12×2 motor.

Modelsport is currently selling orion motors at half price.

I am tempted to pick up some more as spares.

Last time I was out with this buggy a gear stripped and I later found out the gears were not meshing properly. When my ball-race bearings arrived I took the car apart upgraded it and re-meshed the gears. Its now running at a decent pace and it great fun to drive!

I was filming in one hand and steering with the other which is way the steering’s a little crazy.

Luckily they are cheap and easy to get hold of.

Listen for the nice crunching sound in the video. 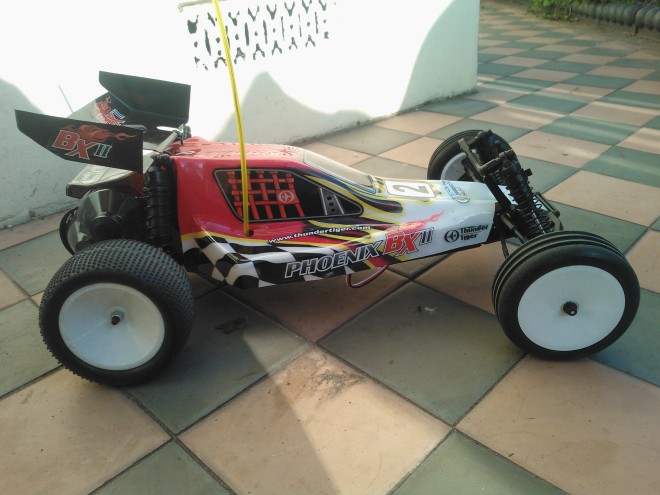 I traded the majority of my Xbox games in today and picked up one of these with some of the money. It is a Thunder Tiger Phoenix BX 2 Buggy.

This is an old model and therefore was being sold off cheap. I brought it in mind that I wanted a 2.4ghz receiver anyway to convert some 27Mhz cars so it was worth it for the parts alone.

I will not be stripping it down though as after a quick drive around in the Sun today I found it to be good fun and fast for an old RTR model.

It come with a 17t Thunder Tiger branded motor which is much faster than the stock motors you would usually get with a Tamiya kit.

I have already ordered some race bearings for it from the United States. 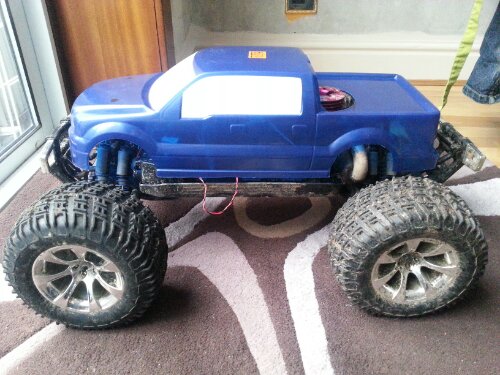 The shell is cut out and being test fitted to mark holes for body post etc. It’s had a few coats of paint but still transparent.

I decided my sledgehammer needed a bit of spicing up and always wanted to add lights to it so it made sense to buy a new shell.

I wanted it to be a truck body so went with HPI’s Ford-150 shell for savage monster trucks.

Here it is as it arrived.

Been getting more daring with my sledgehammer truck lately and driving it through water. Seems completely waterproof just like in the promo video.

Just goes to show how durable this truck is.

My repair to my monster trucks manifold was not good enough and it simply became detached again. This time I used permanent threadlock to seal the nuts to the manifold holding it in place. The only way you are supposed to be able to get threadlock off is with a heat gun meaning the engine vibrations will not loosen it.

I took the truck out for a good run along the beach which was a great test of its off road capabilities. Unfortunately I cracked an exhaust coupling on my second tank of fuel!

Last night I repaired my Sledgehammer S50. I took it out for a test drive today and its running faster than it ever has before.

About a month ago my exhaust somehow become detached from my engine. I can only think this happened after my monster truck flipped while turning at speed. Because of the great performance of the S50 I do tend to drive it quite fast!

There was no actual visible damage to the car except some scorch marks on the manifold and one of the screws holding the manifold to the engine had come out. I tried to order a manifold set from Modelzone but surprise, surprise they had none readily available. So for the second time I tried phoning up Modelzone spare department. As with the last time I contacted them they said they would have the part in 1 – 2 weeks and they would phone me. As expected I have still heard nothing from them. Thankfully my dad being an adapt ebay user managed to track down some screws that fit it and the total repair bill come to less than £2.

I re-tuned my engine after re-attaching the manifold and now its got the best performance I have seen so far. Its fast enough to pull wheelies just like in the promotional video.

The truck is a good entry into nitro rc not too fast and pretty reliable,  just don’t crash it! You will be searching online for hours to get parts.

Here is a video of me running the truck around a scrapyard.