Before going on to another tank I have decided to have a go at something a bit different. 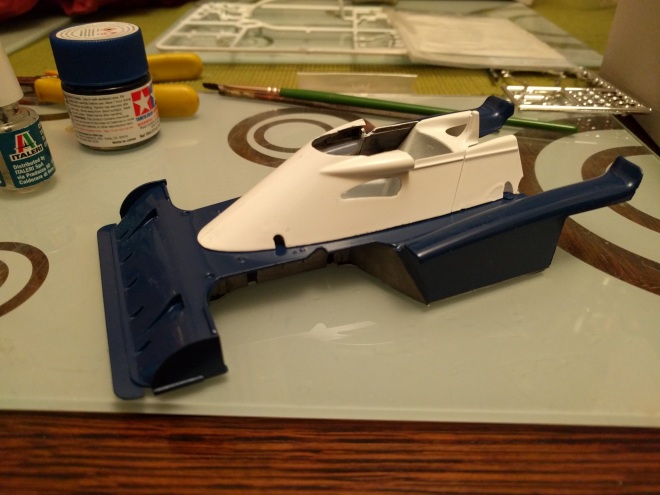 I am a fan of Formula One and strange vehicles so I thought it was time to give the six wheeled Formula One car a go. I have been working on this one for a little while but am between phones at the moment so my photos are all over the place.

This build has reminded me how much easier tanks are to work on. Working with Tamiya’s glossy rattle cans has been hit and miss. It tends to run pretty easily and has required me to sand down and re paint some areas.

Another thing that caught me out is how many fiddly bits there are with car kits. The engine has lots of tiny parts and cables to run around there place. There are also loads of chrome parts with this kit that I have to be careful not to varnish.

The canopy is quite a delicate part on this kit. Its made of two pieces that join at the front. The rear is held in place by a temporary rod which you remove once the front is glued together. This means if were to apply any pressure to the rear of the canopy its likely to snap which is not good considering there are decals that stretch across the front join. It would of been much better if this were a single mould but this was obviously done to make painting the inside easier. The cut-outs that you can see in the side of the canopy have also had some perspex plastic fitted. The canopy sits in some grooves allowing you to remove it at any time for a closer look at the driver and instruments.

I will have some photos of the engine construction soon.