I recently visited the Hovercraft Museum for Hovershow 2016 and it reignited my desire to build an R/C Hovercraft. I went for the top spec version of Palaform’s Fusion 400 model. 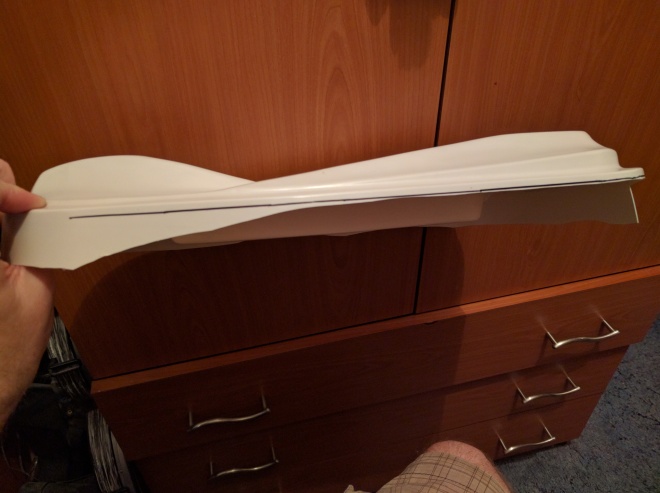 The first thing to do was to trim the deck.

Next I started to trim the hull. The hull had a centre piece that needed removing containing the battery case catch and rudder support. I started by making some holes with my reamer. 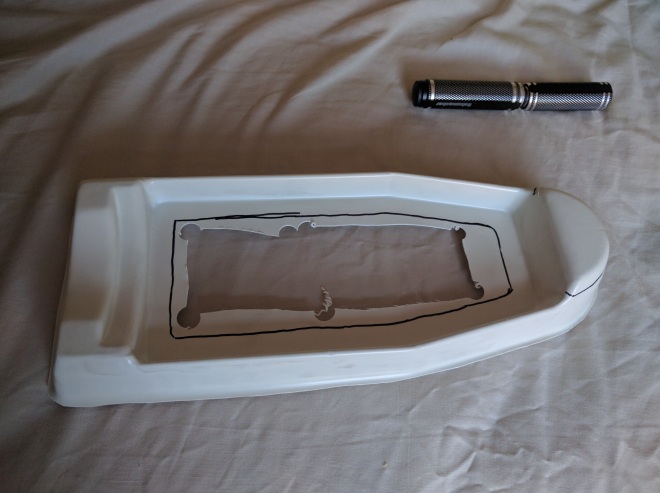 I then used my curved scissors to cut out the rest of the plastic. 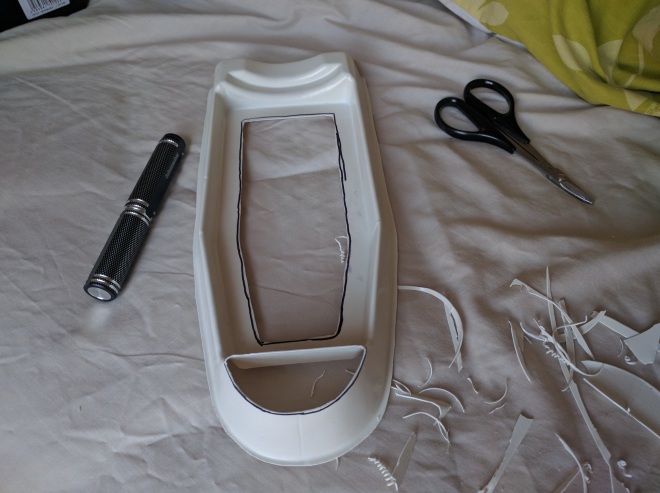 Lastly I sanded the edges to the lines I had marked. I also cut off out the semi circular air hole at the front of the deck.

The skirt is held on with double sided tape. I used “no more nails” 19mm tape and cut it to size in different areas. First tape is applied to the upperside of the hull. This is where the inside of the skirt is attached. 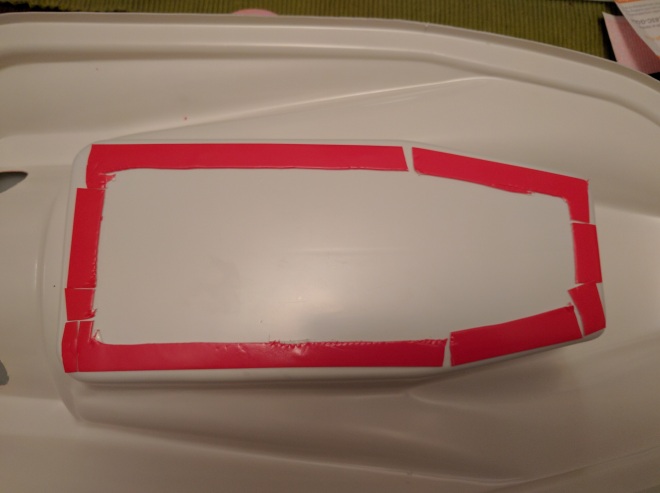 Next tape is applied to the underside of the deck. This tape attached the bottom of the deck to the upper inside section of the hull. 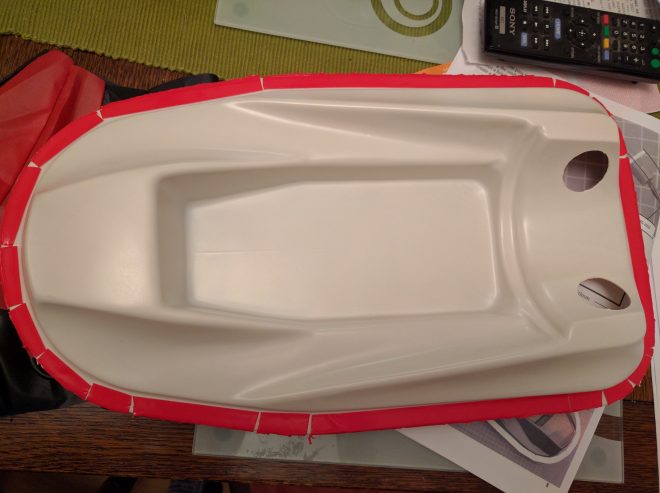 Lastly tape is applied to the outside of the deck. The skirt will be folded around from the hull and attached here.

Holes at the back of the deck are also drilled at this point. These holes will allow the skirt to be inflated by the propeller. 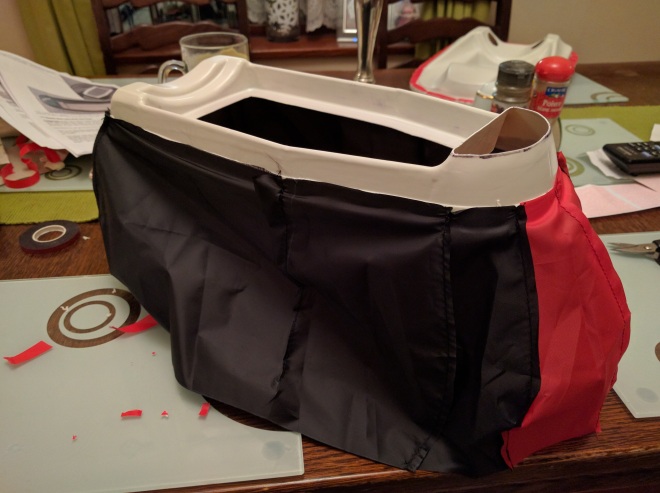 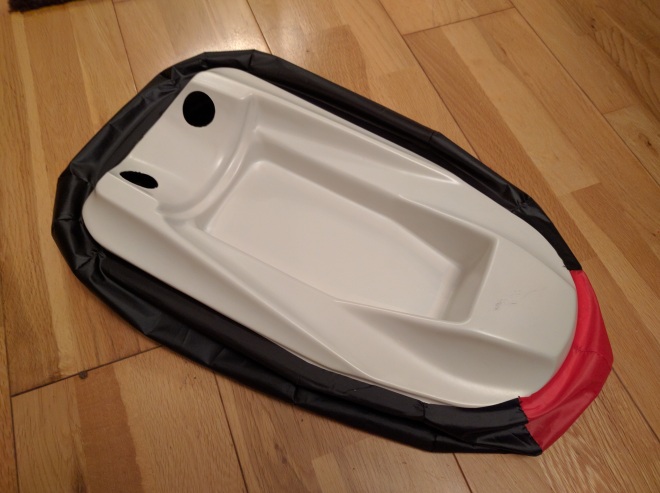 The skirt is then wrapped around the top of the deck and attached to the hull.

The underside of the skirt and hovercraft. A float will be attached here at some point to allow the craft to float on water while the skirt is not inflated.

Next holes for the motor are created on the duct and the motor is attached. The propeller is trimmed to size and added to the motor shaft along with the spinner. 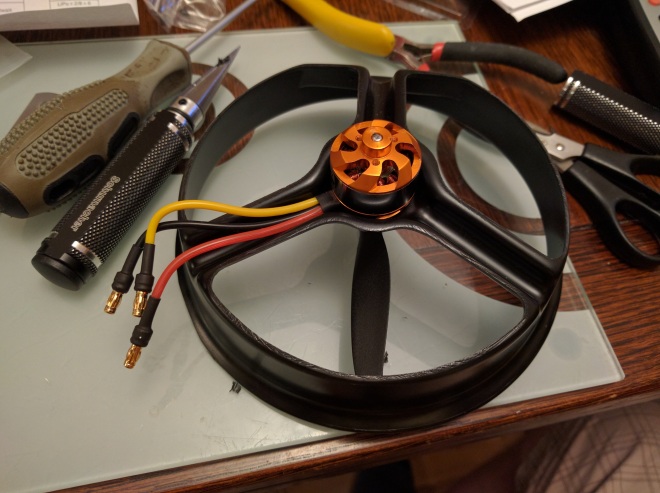 Battery and motor connectors are soldered onto the ESC and the electronics are tested.

A hole for the rudder servo is marked out and made for the servo on a panel to be added to the rear of the craft. I made two big holes using the reamer and used scissors followed by a file to finish the hole.

The battery case is attached to the craft with double sided tape, hook and loop strips are added to allow the top section to be removed to insert the battery.

This completes the build. Below is a video of the crafts first run. In the video it is leaning a little to the front left. This was resolved by taking off and reattaching the skirt.

One thought on “Fusion 400 Hovercraft Build”